The tourists are beginning to return to the city, and if I leave the studio door open to get a bit of a cross breeze with the window, occasionally a lost meandering tourist will make their way to the third floor of the building, and wander into the open door, curious…
There are a total of 5 of us in our large loft room – a fashion designer whose layout tables and sewing machines and bolts of fabric crowd one big corner; a landscape painter with small children who I have yet to cross paths with, but the changing toys suggest she makes appearances at odd hours; a figurative painter who has been in the space for the longest, some 6 years now, and his corner is packed full of the large portraits and expressive experiments of those years; and then Nancy and I in our tiny corner by the door.
It is more of an entranceway than studio, our little corner, but in a city like Toronto, it is what we can manage between the 2 of us, and we love it.
Yesterday I was there with the door open, and given our space, it means I am essentially in the doorway, working away – a point of interest for the 3 tourists who stumbled down the hallway.
They were not especially shy, and after a brief invitation in, went straight into the depths, shrugging by the landscape painter without much notice, and burrowing into the tightly packed corner of the figurative painter. He has some large paintings of famous people out and about – a David Bowie still in progress, Rihanna drying in a corner – and there were ooh’s and aah’s from the 2 ladies in the group.
Turning back, they passed by the bolts of fabric and noticed Nancy’s tiny corner within the corner, a few of her gorgeous pieces up on the wall. The man in their group was especially taken with Nancy’s work and the 3 of them stood there for a while pointing and discussing details.


Finally they turned towards where I was working away in my section around the door, and after interrogating me on how they might get in touch with the figurative painter, if there was a card or a website, they looked around at my various scattered sketches and experiments, and tried to find something nice to say.

One of the women focused on the wall of sketches, and said, “well, they are certainly well drawn”, as if relieved she had found some point of concession – she could grant me that at least. 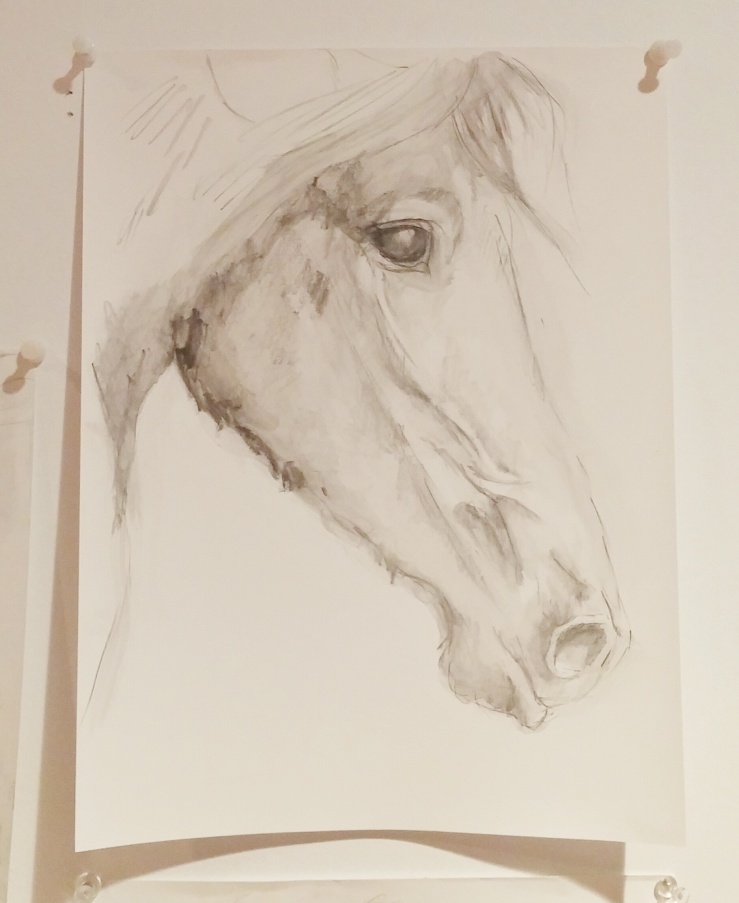 The horse sketches are on terraskin paper, a treeless stone paper, so I told them about this, and then of course they wanted to touch it, and we focused on surfaces and textures for a while, as I showed them which ones were terraskin, which ones mylar.
The large bat that dominates one wall right now is oil on mylar, and one of the ladies said, “he looks like he… I don’t know, as though he has a purpose of some kind.”

My eyes grew wide, as it occurred to me I HAD painted her with a purpose – she was a dream messenger, one of several bat dreams, and so given the repeated bat imagery, asking for attention, I’d been spending time drawing and painting the dream characters, honouring them, staying with them, listening to them as best I can.
What exactly the bat is about, what she wants to say, I still don’t know…

But in there, in the intense focused silence of creating the images, of repeated bat drawings and paintings, I think about the strangeness of them – as if little tiny mice that one day got fed up and said, Dangit! I want to fly!
And did.
And maybe that thought is all she really needs to say…

And so this one comment from a stranger, not filled with flattery at all, but with a kind of faintly uncomfortable, honest relating to the image, totally made my day… 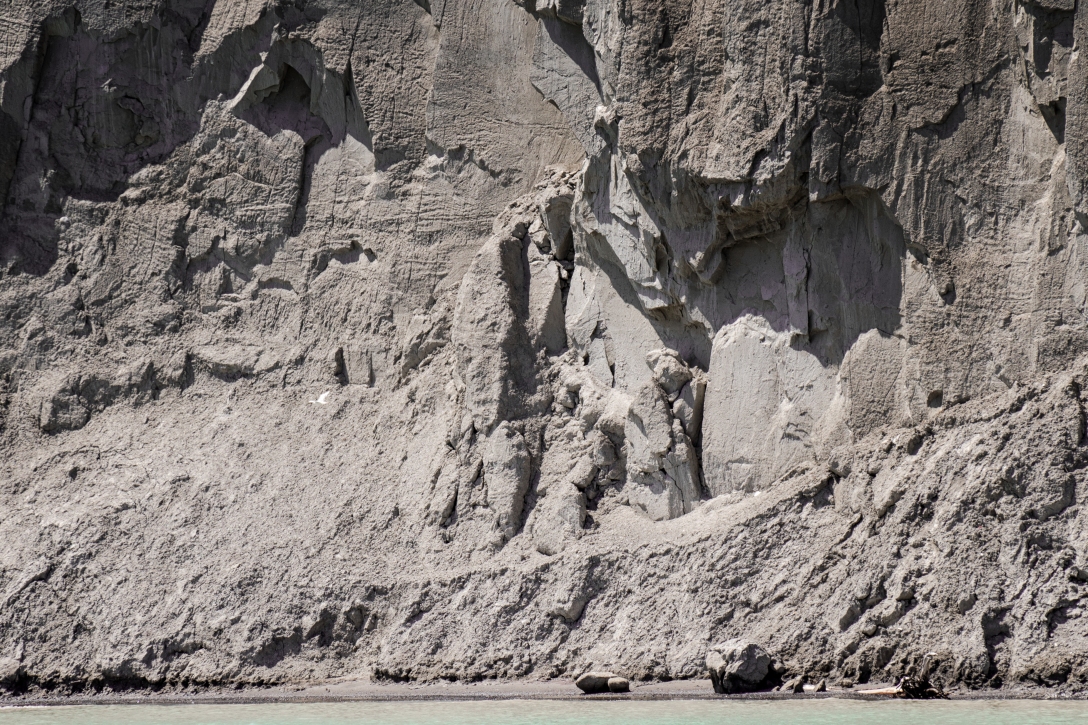 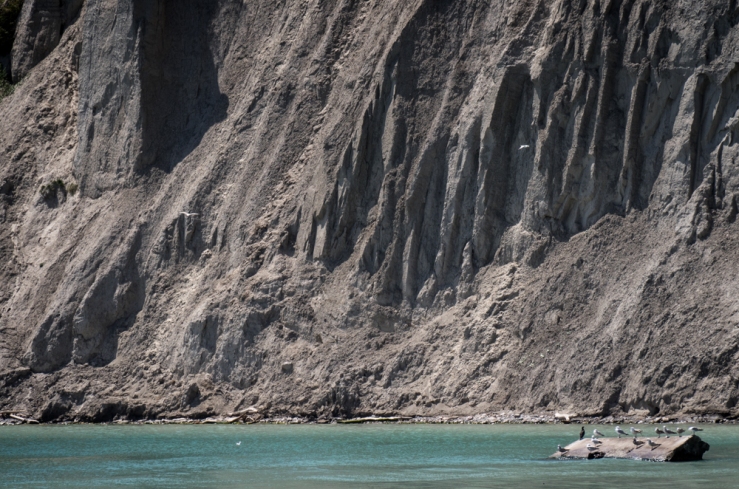 Friday afternoons are sketching class – the best day of the week.
Each week we go to a different location, a park somewhere close by, in the ‘hood, and set up to draw whatever presents itself.
This week was the Scarborough Bluffs.

Such an amazing place – I’d never been this far east and south before, and wow, what a fascinating, strange place, almost like being at the ocean with the strong winds, the sound of waves on the beach, the gulls and kingfishers diving for fish – 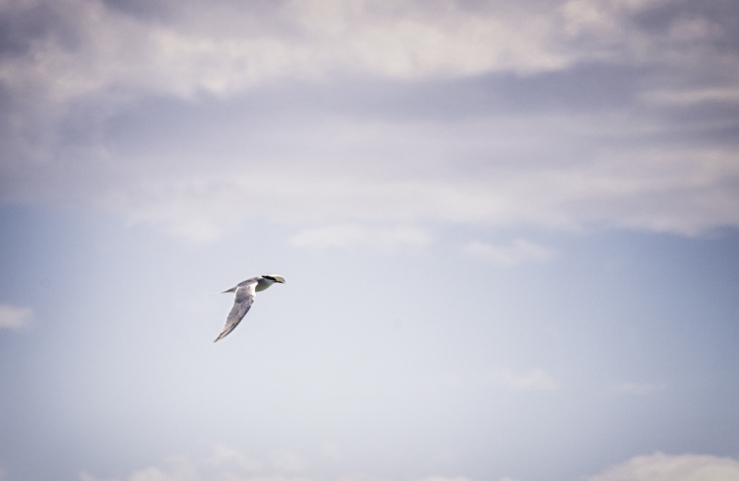 A place to come back to when the sun is low on the horizon and the skies glow orange and magenta.
But it was interesting too how harsh and desolate the cliff faces looked in the bright afternoon light, the ravages of time and water on the shapes of the rocks –

My drawing companions tease me that no matter what I draw – a rock, a tree, an animal – it ends up looking vaguely like the human figure.
A drawing of a cliff face also seems to hold a variety of human faces, snouts and orifices – 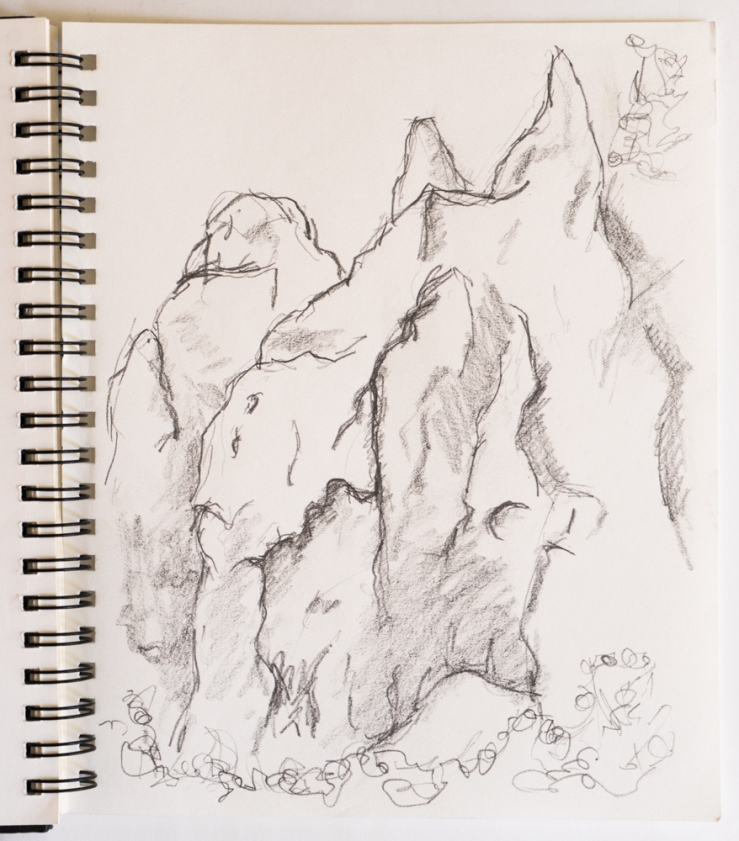 Another rock drawing suggest reclining figures, hairy crevices and the folds of flesh –

A drawing of tree hints at perhaps a headless torso, arms, a belly-button –

Another tree could be an underarm, or a knee –

That is my hand, my mark, apparently.
Out in the sun and wind, facing these cliffs, blown away by the sheer force of the place, it’s hard to even put pencil to paper, the desire to simply soak in the splendour of the day is so overpowering.
Yes, this too is Toronto… 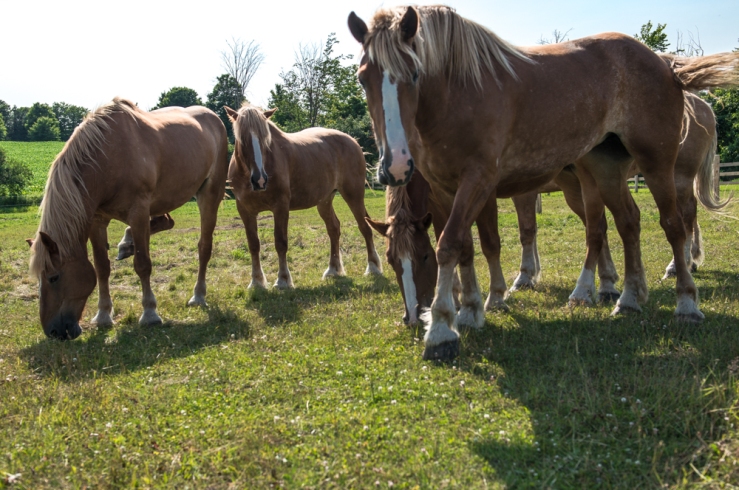