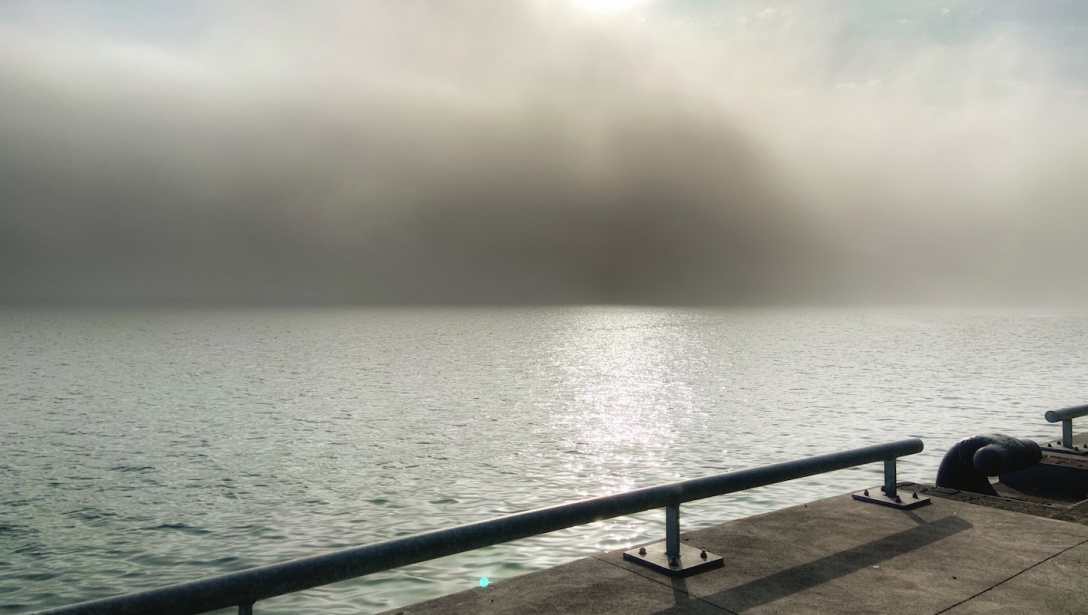 All taken within the last 6 weeks.

All within the same little stretch of waterfront.

The Lake and her Moods.

Some weeks ago, on a still bright evening, I was out at the waterfront with a friend, and a couple of women with youngish kids full of beans were just behind us as we leaned out to get a closer look at the water. There is no tall guardrail or anything at the lip of the boardwalk – quite easy to fall in, really, if you aren’t paying attention – so when one of the kids came up closer beside us for a good lean over the water, his mom snapped at him to step back, saying to us, “dark waters – those are dark waters”.

So true! I remember the light blue of the water at Cayo Coco, Cuba – you know that Caribbean thing with the impossible white of the beaches and then the transparent turquoise of the water, and it’s so clear you can see pretty multi-coloured fish from a distance, gorgeous and brilliant, swimming around…

No, no – up here it’s the great lakes, the water is deep and very dark, and we’re on the edge of a harbour where recently a fisherman pulled up a muskie he didn’t expect to find.

Just walking along the waterfront, you can see the flicker of a shiny belly sometimes. Right now most of the geese have left, but there’s still a few mallard ducks and a number of cormorants who dive and sometimes will suddenly appear on the surface after a long deep search, but there are other obviously scaled bellies that will flicker up above the surface for a moment… mysterious large prehistoric looking fish.

I’ve been thinking a lot about elements lately, as I recently signed up for a seminar about “energy medicine”. It’s something I’ve checked out a bit in the past and loved, but then in the chaos and sweep of other life things got distracted from. But the last few years I’ve had this little health thingy developing that has been demanding some attention, and I have to admit, a visit to the doctor sometimes seems to cause more problems than it solves, so checking out what else is out there, available, and potentially helpful strikes me as worthwhile.

Just this week someone posted this quite spectacular paragraph from Virginia Woolf about the, ahem, “journey” into dark waters health issues can take us on –

Considering how common illness is, how tremendous the spiritual change that it brings, how astonishing, when the lights of health go down, the undiscovered countries that are then disclosed, what wastes and deserts of the soul a slight attack of influenza brings to light, what precipices and lawns sprinkled with bright flowers a little rise of temperature reveals, what ancient and obdurate oaks are uprooted in us in the act of sickness, how we go down into the pit of death and feel the waters of annihilation close above our heads and wake thinking to find ourselves in the presence of the angels and the harpers when we have a tooth out and come to the surface in the dentist’s arm chair and confused his ‘Rinse the mouth—rinse the mouth’ with the greeting of the Deity stooping from the floor of Heaven to welcome us—when we think of this and infinitely more, as we are so frequently force to think of it, it becomes strange indeed that illness has not taken its place with love, battle, and jealousy among the prime themes of literature.

So, since I seem to have found myself with a need to learn more – or maybe it’s a need to learn something different – about how to take care of my health, I’d signed up for this workshop. It’s stuff that borrows a lot from Chinese Medicine – meridians and such – but has been kind of synthesized and reshaped by some California white women types who have turned it into a bit of their own thing.

And gosh, Saturday morning of the webinar, just doing some of their very simple exercises was feeling so awesome, and they are little things that are so easily integrated into anything else you might be into – yoga or dance or whatever – and I was feeling better minute by minute, and was so excited to be reminded of how much I enjoy this practice, when the webinar went to lunch break, and some music was put on for the break period –

Did you hit play there? Did you check out the level of insipid swill?

If so, I’m taking a gander you’ll understand how every cynical bone in my body was triggered into overdrive, that all the goodwill and trust I’d been feeling towards this teaching retreated, the faint hint of bile could be felt in the back of my throat in reaction to the sacharine insipidity, the kind of tune you’d expect to hear on Romper Room or Mr Rogers.

Okay, okay, maybe I’m being harsh, but you know, I came up on tunes like this –

And even now the kind of thing I listen to is better reflected by a local track I can’t get enough of – that speaks to me partly cause it feels like it represents the kids in the city where I live (so much talent, so much class), and then also cause the video is shot just around the corner from our building, just down Cherry St, with a bunch of epic shots in the parking lot where the grain towers are, and you can see the condos across from us in the background…

Both White Riot and 24 are such full-bodied tracks – different schools of music, different cultural references, but they are genuine and rockin’ and don’t have an insipid bone in their bodies.

Anyways, I’d had such a visceral reaction to the musical soundtrack from this workshop that I played it for a friend when she was over. “Oh! The worst of America!” she gasped. So, okay, maybe not quite America, all things considered, but perhaps some of the worst of California.

Werner Herzog – a highly original artist / human in both his films and in his person – has got to be the best at taking the piss out of all things California (where he lives!) –

Of course, California is also where some of humanity’s most astonishing stupidities started, like the hippie movement, New Age babble, stretch limos, pyramid energy, plastic surgery, yoga classes for children, vitamins and marijuana smoking… There are a lot of well-educated people doing very silly things in Los Angeles, like a man in my neighbourhood who one day casually mentioned his cat was in some sort of a frenzy, so he called the cat psychic. He put the receiver to his pet’s ear and for $200 the animal’s problems were solved.

Okay, personally I adore both yoga and marijuana (neither of which were invented in California) and find hippies and New Age babble to be pretty full of potential, but given the degree of the woo people can take things to, yes, I feel the same derisory snorts at the story of the pet’s psychic.

But here’s the thing – I do feel a distinct positive gain from doing the “energy medicine” stuff these California ladies are teaching.

So is it just – “take what you like and leave the rest”?

Cause I’m not sure if maybe I feel another question poking out of the corners of my consciousness as well, and I think that is :

How much change, or which change, is necessary to heal what is out of balance?

How deep and how far reaching does the change need to be?

At this stage of the pandemic, at this stage of the winter in Toronto with the snow falling outside, we’ve been inside a lot. There’s been snowstorms like we haven’t seen in years, which is kind of exciting and a reminder of how beautiful winter can be.

In spite of the danger sign, on some of the coldest days, when the ice was looking thick and solid, people went down the little ladder at the end of the pier and walked on the surface of the lake, crossing the harbour.

Meanwhile, here on the long days inside, we’ve gotten into Cat TV –

She’s bored, she misses her life as a hunter ruling over 4 back yards, clambering fences and scaling trees just to get closer to that bird…

So I’ve been putting Cat TV on – long loops from Youtube of someone’s back yard. One guy has a whole channel with a variety of them – winter / summer / spring / fall of 4 hours with a camera pointing at some seeds while the chipmunks, blackbirds, blue jays and squirrels all scramble and squawk and jockey for position.

The surprising thing I’ve noticed though, is how much I also enjoy having it on in the background. It satisfies some of my yearning for green, for trees and bushes, for birds and critters, as the view from here is ultra urban –

I showed my view to a zoom group I was in – it was a “shamanic” kind of gathering, and a number of the people were calling in from places like Shropshire or Devon or rural Wales, all with the rolling green, the sprawling gardens, birds chirping – so I had to show them my view for contrast.

“Blimey”, said the woman in Wales.

Anyways, last Sunday was suddenly uncharacteristically warm – a one-day blast of spring – so with A & C, we grabbed the moment and headed down to the beach, past the currently bizarre hodgepodge of a skyline on the way –

It was blustery so the kite enthusiasts were out, and one fellow with some kind of wet suit and paddle board situation swam by in the lake. I mean, yeah, the day was warm but there’s still plenty of ice in the lake.

C, the puppy, was not going in there with that ice…

I got to know A quite a bit during the spring and summer – we became walking buddies. She’s 3 floors above me and about 4 doors down, and we’re both single moms and have tons of interests in common, so we go for long walks in the neighbourhood – get outdoors, get some exercise, and talk to another human In Real Life.

She even came out one day in the kayak, which I’d been biking down to the beach and taking on outings while the weather was gorgeous.

The juxtaposition of the ultra urban living situation and the spectacular wilds of the lake makes this neighbourhood really interesting.

The whole area is currently very in development and under construction, which is kind of fascinating – to watch urban planning in action. The city is building a massive park in the strange wasteland on the way to the beach – an area that is very large and very underutilized.

So for example, this –

And the current view of the neighbourhood –

To do my part, I’ve started a little graffiti project – bringing a sense of the wilds as they are displaced and / or shifted down to the huge new park, into the midst of the ultra urban –

Why yes, yes it is, we answered.

With an extra special thanks to Brenda @burnsthefire for the nudge